Seawater pipeline is subject to micro fouling in the form of slime formation leading to accelerated corrosion and reduced head exchange efficiency. Macro fouling is caused by the growth of Barnacles and mussels inside the pipeline reducing the flow rate and sometimes choking the pipeline.

Barnacles and mussels breed throughout the year in tropical waters. In temperate regions, the breeding season is concentrated in the spring and autumn. The settlement period for larvae lasts up to 8 hours. During this time, they are particularly sensitive to the presence of chlorine.

Without bio-fouling protection, mussels enter the pipework system as larvae and attach themselves to the internal surfaces of pipes where they grow and multiply. This causes a gradual restriction in seawater flow and in more serious cases sections of pipework can be completely choked and blocked and sea valves made inoperable.

Significant maintenance costs are also involved where complete sections of pipework have to be manually cleaned or replaced, resulting in extended drydocking periods and delays in returning the ship to service.

Corrosion can be accelerated in two ways. 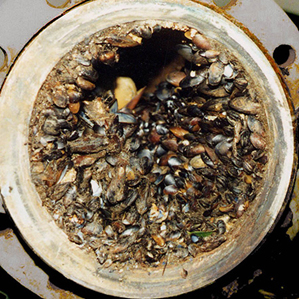 The presence of biofouling on a metal surface results in a decreased oxygen concentration below the fouling layer. This area becomes anodic with respect to areas of the metal surface exposed to oxygenated seawater. The result is pitting corrosion under the fouling.

An additional problem is the corrosion caused by the action of bacteria. Sulphate reducing and iron bacteria are well known examples of organisms whose biological activity or metabolic by-products cause corrosion. Such bacteria live in areas of low oxygen concentrations, for instance under a layer of aerobic fouling organisms.

Tell us about your requirements and our design team will be delighted to create a customized solution for you. Contact us here.
Menu
Translate »